Autor: Achim Stößer | Datum: 16.09.2004 09:20:37
Parliament was suspended after five protesters burst into the Commons chamber while MPs debated whether to ban hunting with dogs.
Four of the men ran out from behind the speaker's chair - another wrestled past a doorkeeper from a different entrance.

Once the Commons resumed business, MPs voted, as expected, to back a ban on hunting with dogs by 339 to 155 votes.

It later emerged the intruders had probably been aided by a Commons passholder. Police are investigating.

Commons Speaker Michael Martin told MPs: "Eight protesters were let into the House of Commons using a forged letter inviting them to a meeting in the Committee corridor.

"Once there, they were led into the small stairway to the north end of the corridor - probably by a passholder who was clearly exceeding his or her authority."

It was not clear whether the passholder who apparently helped the intruders was an MP, a reporter or an employee of a member, he said.

The intrusion was a "carefully planned operation" and the police are investigating, he added.

Increased security measures and extra police officers would be in place for Thursday's parliamentary session, he said.

It has also emerged that one of those who burst into the Commons had contacted a BBC reporter before the protest to say they had staged a "dry run" on Tuesday.

It is understood campaigner Otis Ferry told the reporter how he and others planned to access the Commons but the information was not acted on by the BBC.

Mr Ferry, son of rock star Bryan Ferry, said the group planned to dress as builders and gain access using a letter purportedly from an MP.
The BBC said in a statement: "A BBC journalist was contacted by someone they had never met before.

"The information they received was passed into our newsgathering operation.

"The decision not to act on it further was taken at an operational level and in any respect no violence was threatened. Indeed the source made it clear no violence would be used.

"It was not clear to those handling the information that the demonstration would in fact definitely take place."

BBC political editor Andrew Marr said it was of concern that the protesters' dry run on Tuesday had not been spotted.

He said: "I'm afraid what will happen now is there will be even tighter security.

"It will be even clunkier, it will be more obtrusive and ordinary members of the public who simply want to come to talk to their MPs, as they ought to be able to do in an open parliamentary democracy, will find it even harder."

The MPs' debate on the ban was suspended for 20 minutes after the unprecedented security breach.

The protest comes only two days after a Fathers 4 Justice campaigner got onto the balcony of Buckingham Palace.

MI5 is already reviewing security at Parliament after a protester in May threw a flour bomb at Tony Blair as he was speaking in the Commons chamber.

Wednesday's invasion of the chamber is a security breach which Commons leader Peter Hain said could have been "deadly serious".

It was shortly after 1620 BST that the protesters rushed in, with one shouting at Rural Affairs Minister Alun Michael: "This isn't democracy. You are overturning democracy."

The men were bundled out of the chamber, which is now being guarded by armed police, and later led away handcuffed by police.

As the sitting resumed, Labour MP Stuart Bell said such an invasion had not happened since the time of Charles I.

Shadow home secretary David Davis condemned the protest and demanded an urgent security review and Labour MP Clare Ward suggested somebody must have given them access.

Derek Conway, Tory chairman of the Commons Administration and Works Committee, said the intruders would have needed a clear idea of the layout of the Commons to reach the Chamber.

A Countryside Alliance spokeswoman said some of those who went into the chamber were members, but they were acting as individuals.

"In fact, we condemn this demonstration, which was selfish and self indulgent and took away from the actions of 20,000 law abiding protesters."

But the move was applauded by protesters outside Parliament, with the rally's compere saying: "Well done, you have suspended business in there and that can only be good."

The demonstration in Parliament Square, organised by the alliance, broke up at about 1800 BST.

Van loads of police in riot gear were sent into the area to bolster the hundreds of officers already there, after scuffles in one corner of the square as police sought to keep demonstrators penned in.

Some bottles and fireworks were thrown and some protesters were filmed with bloodied heads after the clashes, but the protests were overwhelmingly peaceful.

Scotland Yard says a small section of the crowd tried to break through the police cordon but it was "in the main... a peaceful demonstration".

Commander Rose Fitzpatrick said: "We had to deal quickly and effectively with that situation, in order to make sure the peaceful protest could carry on in safety, and to allow Parliament and London to go about its normal business with the minimum of disruption."

But some protesters accused the police of being heavy handed.

Some 11 people were arrested outside Parliament for various offences, including affray and using threatening words or behaviour.

It is understood 16 members of the public and one police officer have been injured, none of them serious.

Some critics say the two year delay before the ban would come into force is to avoid pro-hunt protests in the build-up to the election expected next spring.

The minister said the election gave opponents of a ban the chance to register their protest at the ballot box rather than on the streets.

No date has been given for a Lords debate, but this is expected to take place in October.

The government has said that it will force the ban into law using the rarely used Parliament Act even if the House of Lords once again votes against a ban. 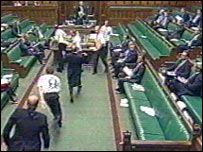 Protesters entered the chamber where MPs were debating the bill 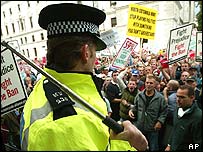 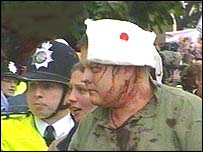 Some protesters have been hurt